By Subir Bhaumik
The 23rd July incident in the heart of Imphal is an absolute shocker. Former PLA rebel Chongkham was killed in cold blood and now six police commandos, who were responsible for his death, have been merely suspended after an extraordina series of photographs were published in the Tehelka sequencing the events that led to Sanjit's killing. The publication of the photographs comes days after Human Rights Watch published a highly-critical report into the conduct of the Indian police in which it highlighted the use of extra-judicial killings.
The pictures, published in the respected Tehelka news magazine, appear to show the sequence of events leading up to the shooting dead of a former militant, Chungkam Sanjit, and the aftermath of the encounter. The body of a pregnant woman is also shown; police later claimed she had been killed in crossfire with Chungkam. According to the official police account of the incident, which took place on 23 July, police were frisking people in the tourist city's Khwairamband Keithel market when they spotted a suspicious youth and challenged him to stop. In the police version, Chungkam pulled out a gun and fled, firing into the crowd. They claimed he was finally cornered in a pharmacy and was killed after refusing to surrender and opening fire with a 9mm Mauser pistol, which was purportedly recovered from his body.

But the pictures taken by a local photographer who has not been named by the magazine for his own protection appear to tell a rather different story and expose the lie of the police, proving they are not merely killers but liars as well. Chungkam is first seen standing next to the pharmacy alongside a number of heavily armed commandos (Pic-1). Far from opening fire and fleeing, he instead appears calm and is seen walking away with one of the commandos. There is no sign of any weapon in his hands. Another picture (Pic-4) shows a commando drawing a pistol and Chungkam is then seen being hustled into the pharmacy. In the last frame in which he is still alive, he still shows no sign of resistance. The next picture (Pic-7) shows him being dragged out by his feet and he is then dumped in the back of a pickup truck. The dead woman's body is also partly visible in a later frame.

Earlier this week a report by the New York-based group Human Rights Watch accused security forces in Manipur of widespread malpractice, including the use of torture and extra-judicial killing. The report claimed one officer told a researcher he had been ordered to commit an "encounter" killing. "I am looking for my target," the officer allegedly told HRW. "I fear being put in jail, but if I don't do it, I'll lose my position." Meenakshi Ganguly, Human Rights W'atch spokeswoman in India, said there had been a history of extra-judicial killing in Manipur which had to be tackled by the central government.
In Assam, the verdict of Parag Das' killing was another shocker. The accussed went scot free because the CBI had filed such a weak case. No wonder, the government always call for a CBI killing because it serves two purpose - it cools down public anger (as if CBI is the march of God on earth) and it finally helps the cover up. Manipur chief minister Ibobi Singh says he can order a CBI enquiry into the Sanjit killing - that is what the Assam government did when Parag Das was killed in cold blood. We can see what has come out of it - a clean chit for the killers. They have been let off.

That is why I was very suspicious when the Assam government ordered a CBI enquiry into the 30th October serial bombings, after its own police had done such a good job with the enquiry. I am aware of the enquiry - R Chandranathan may not be the most popular police officer in Assam because he does not call up the press to leak stories, as many others do, he may not also be a great field officer to handle law and order but he is a first rate investigator and a top class expert on Islamic movements. Now after he had come to clear conclusion about who had perpetrated the 30 October bombings, why did the case had to be handed over to CBI ? Perhaps to cover up some elements of the conspiracy which might upset some big people in power. 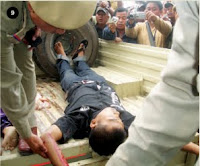 All said and done, it was important that the killers of Parag Das are brought to justice. He was not an armed militant, he was incapable of killing anyone. If the Indian state have to combat the ideology that Parag Das advocated, they would have to fight him at the level of argument. Not kill him. Because by killing him, one can not destroy the idea Parag Das advocated . Also take the case of Swadhinata Phukan (Real Name : Kabiranjan Saikia). He was no killer but a old-school Asomiya romantic. But he was killed in cold blood after arrest. Nobody wins a battle - certainly not a war - in this business of insurgency or counter insurgency unless you fight the idea, that the opponent of the state advocates. Fight the idea, not the man - that's what is needed. And if India has to display that it is a true democracy, unlike China, it has to ensure it fights the forces of separatism in Northeast at the level of politics, by argument, by convincing people that India has a future and independent small states like Assam dont have one. This is not a battle that can be won by guns. And it is too important a battle to be left to generals and police chiefs. There have been numerous incidents of human rights violations in Assam and Northeast India during the past twenty or more years. India, although lauded as the largest democracy in the world, has a consistently poor record in terms of human rights violations. Places where people have been tortured, maimed and killed by the Indian army, paramilitary forces, and the police on numerous occasions are primarily in Kashmir, Punjab, Assam, and the Northeast India. This must stop if we have to convince the world we are a democracy - merely holding elections does not make us a democracy.
။ Photos : Tehelka, Reuters and AP
( Subir Bhaumik is the BBC's East India Correspondent and a known Northeast India specialist )
GO TOP
Posted by Subir Bhowmik's Column At Bengal Newz Dot Com : at 4:47 AM 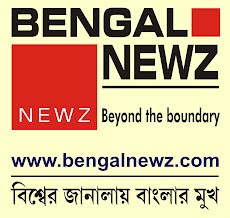 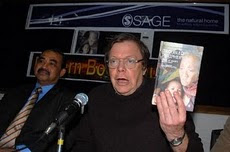 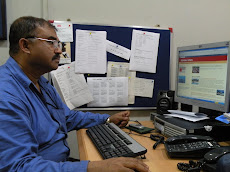 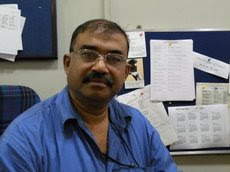